Our History is Everybody’s history

In celebration of a day designed to illuminate emancipation; JUNETEENTH is a national holiday that focuses on African American's liberation. When looking back at history, slavery played a crucial role in the life of African Americans. For 400 years, blacks in America were denied rights, chastised, dehumanized, and defined by the color of their skin. Juneteenth, short for “June Nineteenth,” commemorates a significant day in 1865 when slaves were set free. Before this autonomy, an Emancipation Proclamation was issued by former President Abraham Lincoln. This proclamation was sent out on January 1, 1863 and was issued so that enslaved persons would be “free.” However, this declaration only applied to places under Confederate control and not slave-holding border states. In Texas, slavery continued, and many African Americans did not encounter genuine freedom. It was not until Governor Robert E. Lee stood on the soil in Texas and read General Order No. 3 that declared, “the people of Texas are informed that, following a proclamation from the Executive of the United States, all slaves are free.”

Initially, once the slaves were freed, they took part in parties, family reunions, barbecues, reading, and hosting various church services. They carried out actions they were once restricted from. In Nashville, many residents celebrate this holiday by going to parks, spending time with family, and hosting personal celebrations. Juneteenth marks a legacy of slavery, however, this major accomplishment in history remains relatively obscure. This moment in time highlights the portion of history that signifies how emancipation reached those in the deepest parts of the former Confederacy. Juneteenth has impacted the narrative crafted on freedom, liberation and legacy. The event that transpired on June 19, 1865, was not the beginning of Black people’s quest for freedom and our continued celebration of this great holiday will ensure that we will never stop seeking Freedom. 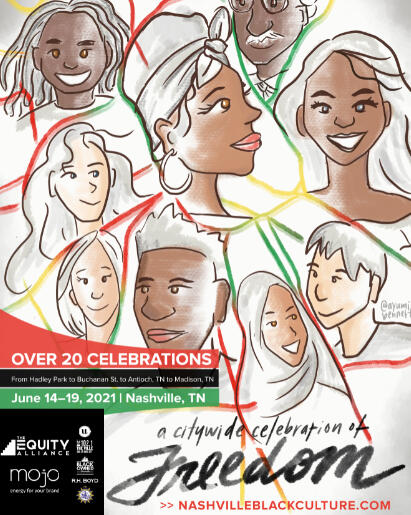 Celebrate with All of Us

Watch this space! We will update with specific hashtags and social accounts to follow during this celebration and beyond.